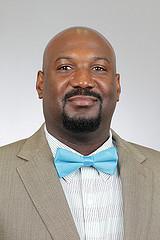 Elzie Barnett begins his fourth season at Wilmer-Hutchins High School. Barnett’s unyielding dedication to making a difference in every phase of athletics resulted in the school’s back-to-back football district championships and its first playoff victory since the reopening of Wilmer-Hutchins. Those qualities have sparked a change in focus and commitment from every player and coach. Off the field, the focus on academics and career-college readiness has helped student-athletes receive various scholarship opportunities from all over the country.

In his first coaching stint at A. Maceo Smith High School, Barnett posted a 6-4 record which resulted in the school’s first winning season in five years. In each of Barnett's years guiding the A. Maceo Smith program, the program meet improvement each season and helped more than 30 players receive football scholarships.

A native of Dallas, TX, Barnett is a 1988 graduate of Seagoville High School where he was a three-year lettermen in football and basketball. While at Seagoville, Barnett earned a full scholarship to Kansas State University to play football. In 1990, Barnett earned an associate’s degree in physical education from Hutchinson College in Kanas where he was voted to the All-Jayhawk Conference football team. Barnett also earned his bachelor’s and master's degree in sports management from Western Illinois University. Barnett was a two-year lettermen at Western Illinois University earning honors to the All-Gateway Conference football team. Born June 3, 1970, Elzie and his wife, the former Edith Wilson, have two children, Elzie Jr. and Elzie III.