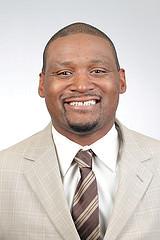 In May 2012, M.T. Tyeskie was named athletic coordinator and head football coach at Conrad High School. Tyeskie is a firm believer that academic success, discipline, and accountability are key components in creating a productive citizen. Tyeskie is a product of Dallas ISD, graduating from Lincoln High School. During his time at Lincoln, Tyeskie excelled in football, baseball, track and field and golf. Tyeskie received an athletic scholarship to Louisiana Tech University where he was a part of the 2001 Western Athletic Conference Championship.

During Tyeskie’s time at Louisiana Tech, he was a member of the Players Council and the Western Athletic Conference All-Academic Team, maintaining a 3.5 GPA. Tyeskie later earned his Master’s Degree in Educational Leadership from North Central University.

Coach Tyeskie wants to ensure that each student athlete is college- and career-ready while creating an atmosphere where excellence is the standard. Tyeskie is big on building lifelong relationships with his student-athletes and wants to ensure that each and every student-athlete has the ability to face adversity with persistence and high character.