In game one, the Bison defeated Kimball 11-1. The Knights defeated Eastern Hills 9-0 during their 2nd game and advanced to the Championship to face off again with District foe, Kimball.

Sunset won 6-2 as they scored 6 runs after being down 0-2 in the 6th inning to hold on for the defeat.

Chris Banda, Humberto Jimenez, Marco Mendoza, and Jacob Ramos were named to the All-Tournament Team. The Bison are coached by Kenny Timmes. 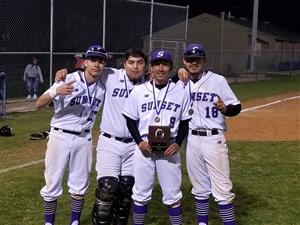