The Countdown Begins.... Meet the Soon to be Inductees of the Dallas ISD Athletic 2020 Hall of Fame

A pioneer of women's professional golf.  Betty Jameson is one of the thirteen founders of the Ladies Professional Golf Association ( LPGA ).  At Sunset High School, she was the first woman to qualify for the men's varsity team in Texas.  After leaving the University of Texas, she turned pro in 1945 and won the U.S Women's Open in 1947 with a 295. It was the first time a female golfer scored lower than 300 in a 72-hole tournament.  Jameson was inducted in the World Golf Hall of Fame and LPGA Hall of Fame in 1951. Betty Jameson passed away in 2009. 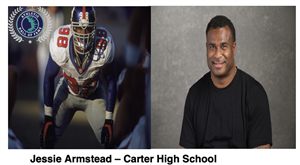 Jessie Armstead. A Dallas Carter legend. Armstead enjoyed an 11-yr career in the NFL, nine with the NY Giants and two with the Washington. He earned five Pro Bowl berths. He is a member of the NY Giants Ring of Honor and in 2013 was selected as the NY Giants Man of the Year.  Armstead graduated in 1989 from Carter High School and went on to win two National Championships with the Miami Hurricanes in 1989 and 1991.   In 1997, he broke Lawrence Taylor’s Giants single season record for tackles with 134, and finished his career with 991 tackles, 40 sacks and 12 interceptions. He led the NFL with 21 tackles for loss in 1999. He was inducted into the Texas High School Hall of Fame in 1999.  At Carter, Armstead was coached by Freddie James, a member of the 2018 Dallas ISD Hall of Fame Class. 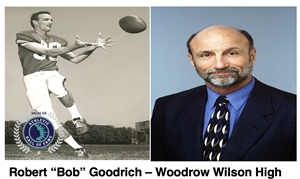 Robert “Bob” Goodrich, a Woodrow graduate, is a 16-time Emmy Award winner who served as a producer for ABC’s “Monday Night Football,” the Super Bowl, the Indianapolis 500, the FIFA World Cup, PGA , & the Olympic Games.  Goodrich was a two-time high school All-American receiver for the Wildcats in 62’ & 63.’ He played football for Southern Methodist University, where he played on the Mustangs’ 66’ Southwest Conference Championship Team and played in the 1967 Cotton Bowl Classic.  Goodrich was inducted to the Texas High School Football Hall of Fame and Woodrow Wilson High School’s Hall of Fame in 2009. A fantastic all-around athlete, Goodrich earned three letters in track and basketball as well.  He joined ABC Sports in 1971 and throughout his career, has had the good fortune of working with some of the greats of sports broadcasting, including Howard Cosell, Frank Gifford and more. 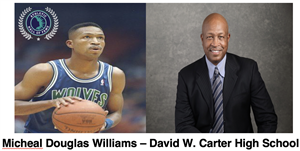 Micheal Williams is a former professional basketball player who played 11 seasons in the NBA.  He holds the record for the most consecutive free throws made, with 97. A 1984 graduate of Carter HS, Williams played at Baylor before being selected with the 48th overall pick in the 88’ Draft by the Detroit Pistons. Williams was selected to the NBA All-Defensive Second Team in 1992.  While at Baylor University, Williams was a two-time First-team All-SWC selection in 1987 & 1988. At the conclusion of his 1992-93 NBA season, Williams ranked 4th in the league in free-three accuracy at 90.7 % after making his final 84 attempts.  In the process, he broke Calvin Murphy’s record of 78, which continued into his 93-4 season, making his first 13 attempts. During his career with Detroit, Phoenix, Charlotte, Indiana, Minnesota and Toronto, he scored 4,533 points, 2,385 assists, and 717 steals. 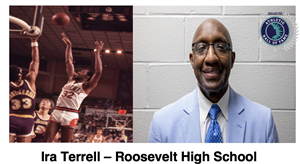 Ira Terrell, a 6’8” power forward from Roosevelt High School, played three seasons in the NBA. He was selected in the 3rd round by the Phoenix Suns.  Terrell attended SMU from 72’-76’ and was selected to the 2012 SMU Athletics HOF Class. In 2019, his #32 jersey became only the fourth retired number in school history.  He is the only Mustang to average a double-double for three seasons and earned All-SWC first-team honors in each of his seasons. He is 2nd all-time at SMU in rebounds with 1,077, sixth in scoring 1,715 and second in career average with 21.4 points per game. He was the 1976 Southwest Conference (SWC) men’s basketball Player of the Year. From 1976-1978, Terrell played for the Suns, New Orleans Jazz and Portland Trailblazers. 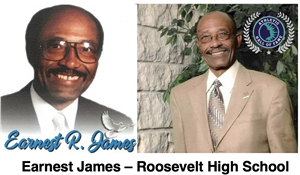 Earnest James, Roosevelt HS, a legendary coach, graduated from Booker T. Washington in 1956.  He brought his talents back to Dallas ISD after receiving his M.Ed. from UNT.  Serving as physical education teacher and coach, he was a part of the inaugural team of faculty to open Roosevelt HS in 1963. He was instrumental in selecting the team’s colors as well as the mascot: The Mighty Mustangs! Coach James was a true Mustang through and through. During his 46-year career, James earned over 200+ victories at track & field invitationals, 18 district championships, 3 regional track championships and 4 state championships. His coaching record also includes 3 national track records by runners and one world junior track record by a runner.  Coach James coached two U.S. Olympic track team members: Roy “Robot” Martin, a 2019 Dallas ISD Athletic Hall of Fame Member and McClinton Neal. Coach James received numerous achievement awards during his career. He has been presented as a TFCA Coach of the Year, Texas Sports Writers Track Coach of the Year, and Roosevelt’s Alumni Lifetime Achievement Award Winner.  James was inducted into the Texas Track and Field Coaches Association Hall of Fame in 2012.

Phil Francis is credited with building Dallas ISD’ athletic training program into one of the premier programs in the country, supervising many athletic trainers over the years and gaining respect of both students and trainers as head of the district’s Sports Medicine and Athletic Training Department. Francis was conscious of elevating the profession’s status. If anything was worth doing, Phil believed that it was worth doing at the highest level possible. Francis is a graduate of Solon HS in Ohio, where he was a member of the baseball team that was the 1972 State Runner-Up.  Phil played college baseball and had a brief minor league baseball career.  In 1978 he graduated from Kent State University.  Phil was known for practicing critical, consistent medical care with all the student-athletes he treated.   Phil retired in 2017 after 39 years of service to Dallas ISD with 32 athletic trainers. When he started in 1978 and became the Head Athletic Trainer in 1984, he oversaw all of Dallas’ high schools and middle schools largely by himself and with three other athletic trainers.