In Some Dallas Schools, Every Student Is Also A Scout

The Irving-based Boy Scouts of America recently launched an effort in some area schools, helping to teach classes and introduce more kids to scouting during the day.

The program, currently running in four Dallas middle schools, was inspired by the Girls Scouts, an organization that's been going inside local schools for decades.

A need for young men

This is routine at regular Boy Scout meetings. This gathering, though, is anything but. The Pleasant Grove campus is one of four middle schools in the Dallas district where Boy Scouts take over gym class once a week. And every kid in this school is a Boy Scout.

Skeptics say this is just a way to grow shrinking national membership numbers. Espie Randolph, Boy Scout 0utreach director for the Circle 10 Council, which includes part of North Texas, calls it a need.

“Girl Scouts,” Randolph says, “we give them credit; they started a process. It’s a great challenge because you meet boys as teenagers and you’ve got a lot of things you’re challenged with at that age.”

So on this Thursday, 11 and 12 year-olds learn how to build a fire, set up a tent, cook outdoors. They’re preparing for a camp out. Many of these kids in this Pleasant Grove school are from low-income families, and might not get a chance to go camping. But thanks to this effort, they go.

“It’s a tough neighborhood. I live in the area,” Payne says. “And so I tell kids, 'This is not your comfort zone, OK? Expand your comfort zone. See what else is available out in the world.' And some of these kids, when they see hopelessness, then they feel like they’re hopeless. And what we’re trying to do is tell these kids, 'You’re not hopeless. All you’ve got to do is put in the effort like everybody else.'”

Sixth-grader Noel Peña is a fan.

“If it’s just gym class, all we’re doing is athletic stuff," Noel says. "If we do Boy Scouts, it’s expanding our horizon, and it teaches us life skills — how to tie knots and all that. So it’s pretty good.”

Fifteen miles away, students at Solar Prep are also getting some scouting lessons — from the Girl Scouts. In Dallas ISD’s newest all-girls school for science, technology and the arts, every student is a Girl Scout.

Girl Scouts have been going into schools for 30 years. But what’s different about Solar Prep? The scout organization has taught the teachers to incorporate the Girl Scout curriculum into Friday lessons.

“I love Girl Scouts because you get to have all these Girl Scout sisters with you and they’re here with you like, like they’re there for you. They have your back,” Lucia says. 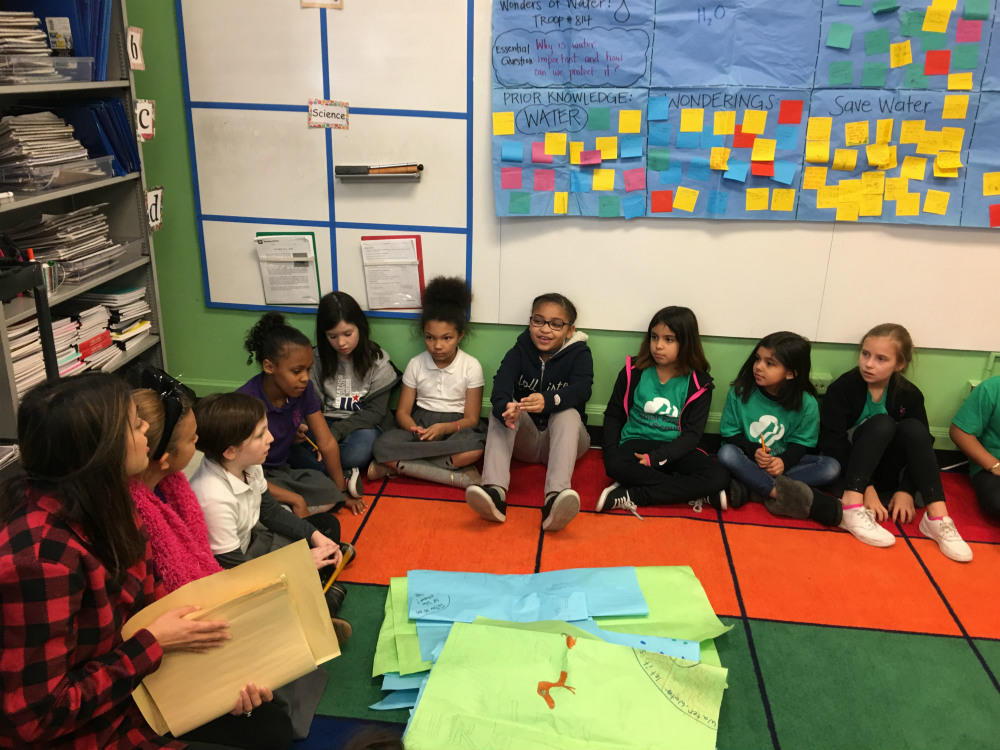 At Solar Prep, every girl is a scout. And every Friday is Girl Scouts Friday.
CREDIT BILL ZEEBLE / KERA NEWS

Principal Nancy Bernardino helped build Solar Prep from scratch and decided that including Girl Scouts was a must.

“Every Girl Scouts Friday, I mean you see it’s a different feeling in the air of girls wearing their tunic or their sash," she says. "And we didn’t realize how much of an impact it was going to make on the girls until we actually saw them wearing them and just, it really raised their level of confidence: 'I am a Girl Scout.'”

"What Girl Scouts has really been about all this time is leadership development."

Jennifer Bartkowski, CEO of Girl Scouts of Northeast Texas, says it’s why her organization’s been in schools for three decades.

"People don’t generally know about it though. When people think of Girl Scouts, they think of cookies, camps and crafts. And what Girl Scouts has really been about all this time is leadership development,” Bartkowski says. “We’ve partnered with schools because that’s where the girls are, but it’s also a great place for us to partner because they are getting an academic adventure and experience and we're providing the other side of that and that makes a lot of  sense to us.”

Bartkowski says when the Boy Scouts asked for help to set up its own Scouts in Schools program, she didn’t hesitate.

Back at Solar Prep, we walk into Bethany Seagroves' Talented and Gifted class. On this Friday, though, she’s teaching the Girl Scout curriculum.

“Here at Solar, everything is about empowering girls. Like today, we went and talked about rebel women and how all these women had positive stories, and so it’s teaching them that they can do the same things as well," Seagroves says.

She says the big difference between regular class and Scout class is scouts take action. This day's theme is water.

“They’re not just learning the water cycle and the benefits of recycling, they’re learning to go out actually into the community and make a difference,” she says.

Which is why leaders at Solar Prep and the Young Men’s Leadership Academy hope their students create projects that benefit their neighborhoods, so they can earn scouting’s top honors: the Gold Award and  Eagle Scout.